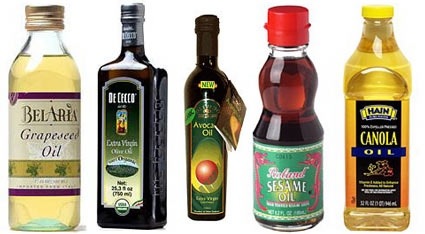 Consuming denatured foods is one way to wreak havoc on your health and, believe it or not, the type of cooking oil you use can be especially problematic.

A food becomes denatured when it has been chemically altered to such an extent that the body cannot break it down and assimilate it properly, triggering abnormal reactions such as gastrointestinal distress, inflammation, and allergies. Over time, these harmful foods can promote more chronic conditions such as heart disease (e.g. atherosclerosis), arthritis, and even cancer.

So how do these foods become denatured? The easiest and most common way is by excessive or prolonged exposure to heat, oxygen, or light or by way of some unnatural chemical process. The most typical methods of denaturing foods are deep frying, pasteurization, using genetically modified organisms (GMO’s) to manufacture or grow them, letting them become spoiled or rancid (more common than you think), and otherwise chemically altering them.

Ever wonder why you tend to feel worse immediately after eating fried foods?  Typically, the oil that food is fried in has been used several times and has been around for a while.  Not only is it rancid, but it has been exposed to excessively high temperatures multiple times.  I am convinced that the reason my stomach nevers feels right after eating at one of those Japanese hibachi-style steak houses is because the use to cook with and keep in those little plastic squeeze bottles is old and rancid.

One example of chemically altered foods is trans fat. Trans fats are partially hydrogenated oils that are found in many packaged, baked goods and snack foods such as chips, crackers, and snack bars. The FDA recently banned trans fats because they are finally acknowledging (it only took them 30 years to come around) that trans fats “are implicated in promoting heart disease.” What is particularly troublesome to me is that the Girl Scout cookies my dear, sweet 9 year-old daughter brought home from her meeting tonight is loaded with this now illegal substance!!

Denatured fats and oils are particularly problematic because fats are key building blocks in the production of hormones. Hormones are involved in virtually every metabolic process in our bodies. So contrary to popular belief, some dietary fat is not only good for us, it is essential for good health. The thing about fats is they are not all created equal. Some are more stable than others. This means that some can withstand more heat, oxygen and light than others before becoming denatured.

Essentially, the more saturated the fat, the more stable the oil. For example, butter is more stable than canola oil and is a better choice for use as a cooking oil because it can withstand higher temperatures before it begins to break down.

Generally speaking, polyunsaturated vegetable oils and plant-based oils are more unstable than butter and more easily denatured. The exceptions to this rule are the tropical oils, such as those from palm fruit and coconut. These oils naturally contain more saturated fat. In fact, coconut oil is so stable that it can be left out, unrefrigerated indefinitely without ever going rancid.