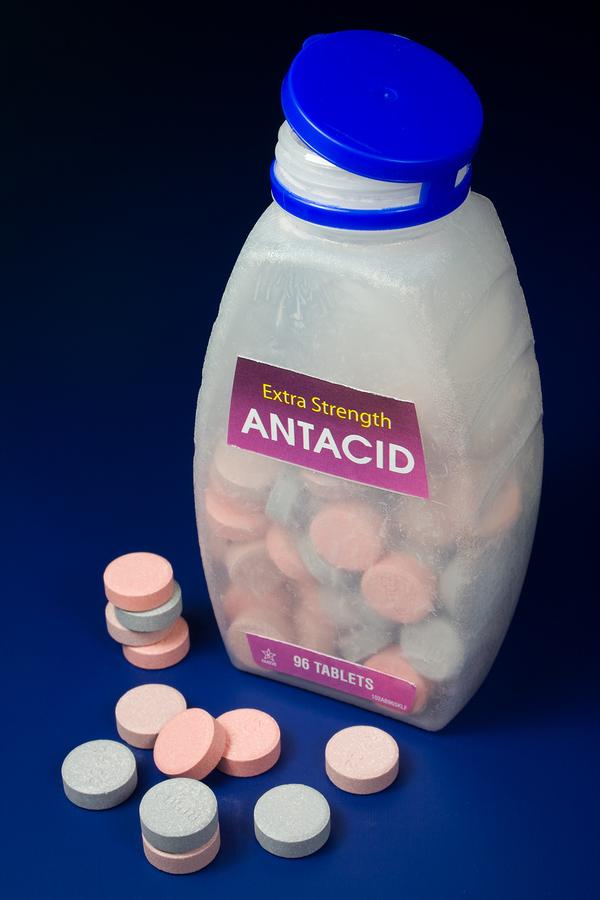 Acid reflux or Gastrointestinal Esophageal Reflux Disorder (GERD), as it is often called by medical professionals, is a virtual epidemic in this country. In fact, Nexium—the “little purple pill”—is the medication most commonly prescribed by physicians for this condition and it perennially outsells every other prescription drug on the market. People suffering from acid reflux-like symptoms have even made antacids like Zantac the top-selling over-the-counter medications.

What’s more disconcerting is that the ads for these drugs make no qualms about suggesting that we use them prophylactically when we know we are going to gorge on something that typically upsets our stomach. And why not? That is essentially what these drugs are designed for—to prevent or reduce the body’s production of stomach acid. But nobody seems to ask why there would be excess acid in the stomach to begin with. So people take these drugs to deal with the symptom of a more serious underlying condition as opposed to dealing with the underlying condition itself. Indigestion has become a very American disorder.

What most people don’t realize is that these drugs can not only exacerbate the problem, but promote new, more serious conditions altogether. The best way to put an end to this vicious cycle is to first gain a better understanding of the physiology of digestion.

Digestion begins the moment you begin to chew your food. Enzymes are released in your mouth through the salivary glands which begin to break down the carbohydrates in your food. At this time, your body also sends signals to your esophagus to begin peristalsis (the movement of food through the GI tract via involuntary muscle contraction) and for the stomach to begin releasing digestive juices such as hydrochloric acid (HCl) and protease to begin breaking down the proteins and fats in your food once they reach the stomach.

The stomach lining is coated with a thick mucous layer that protects it from the gastric juices. The digestive process continues when the remaining food and excess juices leave the stomach and travel through the small and large intestines where more enzymes are released to break down the yet undigested food particles and assimilate the nutrients within them so they can be properly absorbed into your bloodstream.

So, in order for GERD to occur you you simply need a faulty esophageal sphincter and/or a hietal hernia.  The acidic juices that reflux back into the esophagus are indeed causing the burning sensation and can potentially wear down the esophageal lining, but if you had sufficient HCL, the food would be properly broken down and passed onto the next phase of digestion instead of getting kicked back up into the esophagus.  When your body doesn’t produce sufficient juices—such as with aging, chronic stress, years of eating over-processed food, food intolerance or food allergies, H-pylori bacteria, or simply genetic deficiencies—the food does not get broken down properly and the undigested food can putrefy and/or ferment which produces acid and that is what refluxes.   It is possible, but much less common, for your stomach to produce HCl in the absence of food, although it can happen with chronic stress.

So you can see the dilemma here. You are taking a drug that prevents your stomach from producing the acid—the very substance that it needs to digest the food you eat. This can lead to all kinds of problematic conditions, many which are far more serious than the discomfort you may feel from acid reflux. We are talking about food allergies, leaky gut syndrome, skin disorders, arthritis, and potentially serious nutritional deficiencies, just to name a few. Another equally serious consequence of eliminating or reducing HCl is that it diminishes your body’s primary defense against food-borne infections. Further evidence of the lack of knowledge around the digestive process is that many doctors recommend antacids like Tums as a calcium supplement because the active ingredient is calcium carbonate.  The problem is that you also need stomach acid to absorb calcium and the carbonate form is actually neutralizing that acid.

To be fair to physicians who are prescribing these medications, GERD is actually one of the leading risk factors for esophageal cancer. Another function of the drug Nexium is to heal the lining of the esophagus. So they are trying to prevent a potentially very serious and chronic condition. But there are other ways to do this without creating or exacerbating other conditions.

Here are some very simple steps you can take to address or prevent acid reflux and some of the complications created by reflux:

Remember, medications are generally designed to address symptoms of underlying conditions that, if left untreated, can get worse. Drugs have their place, but be aware of the side effects that come with them and always address the underlying conditions. There is usually a natural solution that can eliminate your need for the drug in the first place.