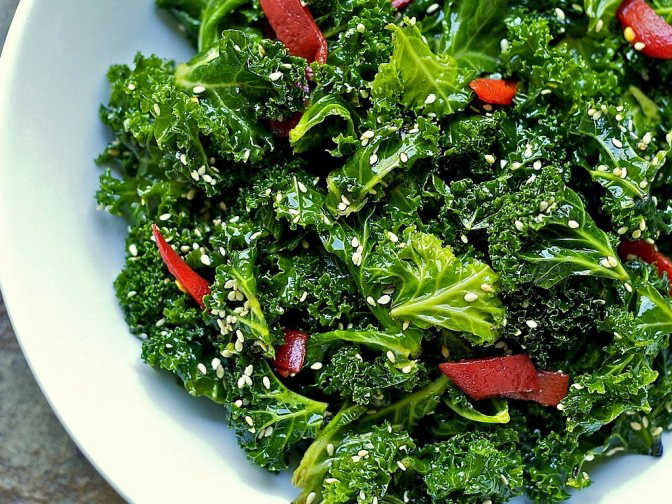 For frequent readers of this blog, you know that I am a big fan and proponent of kale.  I love that it is one of the most nutrient-dense foods available to us—a true superfood—and it has been masquerading as a garnish all these years! It is the unsung hero of the vegetable world, if you will.  I also love its versatility, which is on display in the recipes below.  The first recipe is the simplest way to prepare kale.  You won’t believe how simply using your hands can make a once bland food come alive.  In the second dish, it is lightly sauteed or ‘wilted.’  And in the third, the raw form is combined with another under-appreciated green and some fresh fruit.  Enjoy!

Tear leaves of kale off the stalks and place them in a bowl. Blend the olive oil and vinegar together.

Pour the dressing over the kale and massage the dressing into the leaves with your hands until the leaves are soft. This not only makes the kale more tender and palatable, but it releases many of the nutrients and makes it easier for you to digest.

Sprinkle the seeds over the salad and serve.

Sautee the bell pepper and ginger in olive oil in a large skillet over medium heat until tender (2-3 mins).

Add the kale and soy sauce and cook, tossing occasionally, until wilted (6-8 mins).

Mix in sesame oil and sprinkle with sesame seeds and sea salt.

Add kale and radicchio and toss to combine.